Call for Nominations for 2014 Florida Veterans’ Hall of Fame

The Florida Legislature established the Florida Veterans’ Hall of Fame in 2011 to honor and recognize military veterans for their post-military service to the state.

The nomination period is between Jan. 20, 2014 to Apr. 30, 2014.  Anyone is permitted to nominate a military veteran. Those nominating a veteran will need to complete a nomination packet that can be downloaded from http://floridaveteranshalloffame.org/. Nominations are based on established selection criteria including recognizing military veterans who, through their works and lives during or after military service, have made a significant contribution to the state of Florida through civic, business, public service or other pursuits.  It is not a traditional military hall of fame, as it focuses on post-military contributions to the State of Florida. Letters notifying inductees are mailed later in the year to the nominators and up to 20 military veterans can be inducted into the hall each year.

“We are pleased that we are able to continue this tradition of recognizing veterans for their leadership and civic contributions to the state,” said retired Air Force Col. Bruce Host, a former Leon County Commissioner who serves as council chairman.  “It is a great opportunity to highlight Florida’s heroes as they show lasting commitment to community after their military service.”

The inaugural induction ceremony took place on Nov. 12, 2013 in the Cabinet Room of the State Capitol Building in Tallahassee.  Names honoring selected inductees are commemorated on a plaque in the Capitol Rotunda.

The Florida Veterans’ Hall of Fame Council, a seven-member advisory panel, is responsible by Florida Statute for submitting to the Governor and Cabinet a list of recommended nominees each year.  In selecting its nominees for submission, the council gives preference to veterans who were either born in Florida or adopted Florida as their home state.

For more information and to nominate a veteran, visit http://floridaveteranshalloffame.org/ 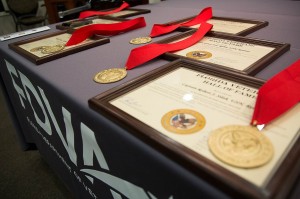