Florida Commemorates Anniversary of America’s Entry Into World War I

TALLAHASSEE – April 6, 2017 marks the 100th anniversary of the United States’ entry into World War I against Germany.

Floridians in all branches of service were sent overseas to fight in the war as part of the American Expeditionary Force, alongside service members from Britain and France.

A total of 42,030 Floridians served in the war, which ended on Nov. 11, 1918, according to the Florida Historic Capitol Museum.  The enlistment numbers in Florida were significant for a state with fewer than one million residents.

Among those who served is the late Spessard L. Holland, a World War I veteran of the Air Service, American Expeditionary Force, who served as a county judge, State Senator and Governor of Florida during the Second World War before serving as a U.S. Senator for more than 24 years. Holland is a 2016 inductee into the Florida Veterans Hall of Fame.

To commemorate the anniversary, the Florida Historic Capitol Museum in Tallahassee is sponsoring an exhibit entitled, “Over Here and Over There: The United States, Florida, and World War I.”  The traveling exhibit is on display until May 21, 2017. 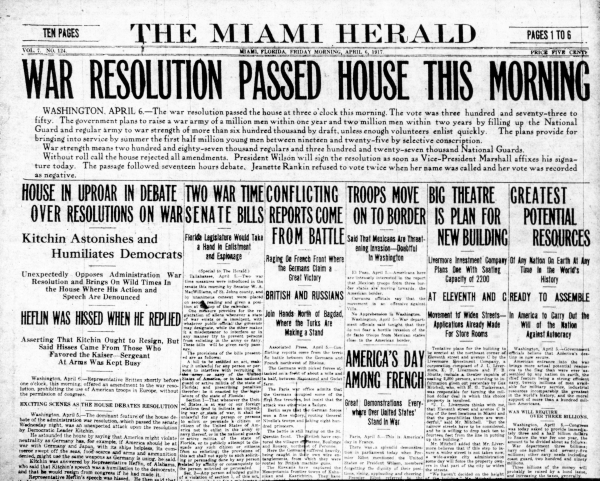