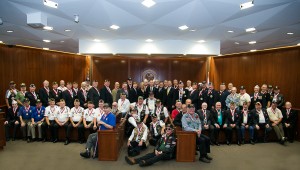 Governor Scott said, “It was a privilege to present the Vietnam Veterans who joined us today from across Florida with the Governor’s Veterans Service Award for their service to our state and nation, and honor them with the Welcome Home Vietnam Veterans Day resolution.  As a Navy Veteran, I know firsthand that we can never fully repay our debt of gratitude to those brave men and women who served and protected our freedoms.  As we continue to make Florida the most military-friendly state in the nation, we will keep on giving our veterans the support and recognition they deserve.”

Florida Department of Veterans’ Affairs Executive Director Mike Prendergast said, “From the dedication of Florida’s Vietnam Veterans Memorial in 1985, to high school diplomas for draftees unable to complete their education, to creation of a Vietnam War license plate, we recognize the honorable service of our Vietnam Veterans.  In honoring the Sunshine State’s nearly 500,000 Vietnam Veterans, we must not lose sight of those who did not return.  Florida remembers its missing by flying the POW/MIA Flag daily over the State Capitol and at the state’s network of Interstate Rest Stops and State Parks.”

The “Governor’s Veterans Service Award” honors Floridians who have served in the U.S. Military.  The front of the medal depicts the Great Seal of the State of Florida. The back of the medal displays the five seals representing the five branches of U.S. Military with an inscription that reads “Honoring Those Who Served.”