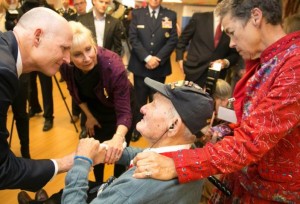 The ceremony was held at the Clifford C. Sims State Veterans’ Nursing Home in Panama City, one of six veterans’ nursing homes in the state. During the ceremony, Governor Scott highlighted the service of Florida veteran, Sergeant Ben Allison.

Sergeant Allison enlisted in the Alabama National Guard and after two years, he enlisted in the U.S.  Army. Ben received his ump and Ranger training in Fort Benning, Georgia and proudly served his country for 28 years. Ben received the rank of Sergeant during his first assignment in the 509th Parachute Regiment in Germany, and was assigned as squad leader in an Infantry Platoon Squadron.

During his military career, Ben led his platoon in recon parachute jumps in prominent areas throughout Italy, France, Spain and Belgium. He was later reassigned to the 101st Airborne Division and served in Vietnam, where he earned the Rank of Sergeant 1st Class.