TALLAHASSEE – Gov. Rick Scott recognized retired Sgt. Maj. Ray A. Quinn with the Governor’s Medal of Merit during a meeting of the Florida Cabinet, May 23. Sergeant Major Quinn served in the U.S. Army and Florida National Guard for 30 years.

“I’d like to thank Sergeant Major Quinn for his dedication to the safety of families in Florida and the nation,” said Governor Scott. “I am incredibly humbled by his lifelong service, first as a member of the Army National Guard and then as a community leader in local government. I’m honored to present him with the Medal of Merit today for his service and positive impact on the lives of Florida veterans.”

Sergeant Major Ray A. Quinn enlisted in the U.S. Army in 1965 and transitioned to the Florida Army National Guard in 1973. He was an infantry soldier, First Sergeant, Operations Sergeant and Personnel Noncommissioned Officer. After he retired, he went on to serve on the staff of the Adjutant General of Florida as the Director of Executive Services. In 2010, Quinn was appointed by the Governor of Florida to serve as an interim County Commissioner for District 3 in St. Johns County. He served in that position from January 2010 until January 2011. He currently serves as Chairman of the Florida Veterans’ Hall of Fame Council, Vice Chair of the St. Johns County Veterans Council and is Vice President for Veteran Affairs, First Militia Chapter Association of the U.S. Army.

“Sergeant Major Quinn has dedicated his life to serving his community, state and nation during his time in the U.S. Army and Florida Army National Guard,” said Glenn Sutphin, executive director of the Florida Department of Veterans’ Affairs. “He continues today to serve his community and veterans across the state with honor and integrity. Sergeant Major Quinn represents what it means to be a member of the Florida National Guard and a leader in our community.” 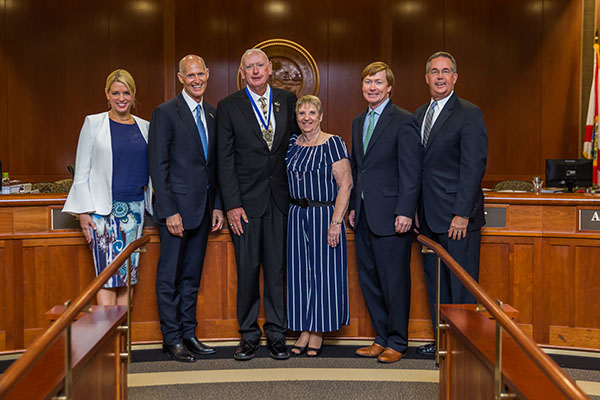