TALLAHASSEE – Gov. Rick Scott awarded 723 veterans with the Governor’s Veterans Service Award for their service to Florida and the nation during his four-city “Honoring Florida Veterans” tour July 6-7.  The Governor also highlighted funding included in the Fighting for Florida’s Future budget that supports active military, veterans and their families.

The budget items include expanding a Crisis Center Support Line for Veterans beyond the Tampa region, a pilot project to acquire, screen and train dogs to become service dogs for eligible veterans, and funding to complete the Ardie R. Copas State Veterans’ Nursing Home in Port St. Lucie.

“We celebrate America’s independence and the freedom that we enjoy because of the brave men and women who have served our country,” said Governor Scott.  “It is important that we continue to appreciate and honor the members of our Armed Forces not just on holidays, but every day.”

Governor Scott visited Panama City, The Villages, Cocoa and Wauchula during the veterans’ appreciation tour.  Since August 2013, the governor has honored more than 11,500 honorably discharged veterans and Florida National Guard members with the award in monthly ceremonies around the state.

“We must never forget the service and sacrifice of those who have courageously served our country,” said Chief Financial Officer Jimmy Patronis, who joined Governor Scott in Panama City July 6. “It was an honor to join in recognizing these brave men and women.”

Other cities visited in 2017 include Miramar, Tampa, Tallahassee, Live Oak and Bonita Springs.  Future monthly ceremony locations can be found online at https://floridavets.org/gvsa/. 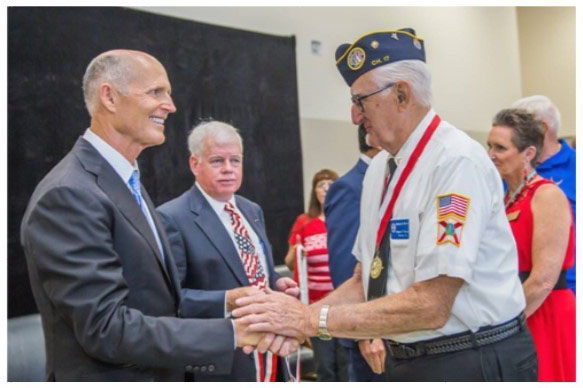