TALLAHASSEE – Gov. Rick Scott awarded retired Maj. John L. Haynes with the Governor’s Medal of Merit during the March 14 Florida Cabinet meeting. Haynes, who retired in 1975, is a combat veteran who served in the U.S. Marine Corps during World War II, the Korean War and Vietnam War.

“I’d like to thank Major Haynes for his decades of brave and selfless devotion to serving our country, state and community,” said Governor Scott. “I’m honored to present him with the Medal of Merit to recognize his lifelong service and positive impact on the lives of veterans.”

In 2013, Haynes was inducted into the inaugural class of the Florida Veterans’ Hall of Fame for his decades of veterans’ advocacy.

“Major Haynes possesses every attribute that members of the military strive for; he is the epitome of the American military member,” said retired Army Lt. Col. Glenn Sutphin, executive director of the Florida Department of Veterans’ Affairs. “Not only has he defended his country in three wars, but he continues to advocate for his fellow veterans through public service.”

Haynes, a Florida native who began his career as an enlisted member, is chairman emeritus of the Florida Veterans Foundation. 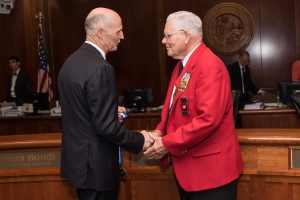