TALLAHASSEE – The Consul General of the Republic of Korea, Young-jun Kim, donated 10 boxes of protective masks to the Florida Department of Veterans’ Affairs during a televised ceremony at the Capitol, April 22. The masks will be used in Florida’s network of state veterans’ homes.

During the visit, Consul General Kim presented to state leaders 10,000 KF94 facial ‎masks made in the ‎Republic of Korea. The masks are ‎designed to prevent the spread of ‎airborne viruses like COVID-19.

Hartsell and Lee thanked Consul General Kim for the generous donation and presented him with a Florida Flag, which had been flown over the Capitol.

“We have such a great relationship with the Republic of Korea. We couldn’t be more appreciative of this gesture,” said General Hartsell.

There are more than 118,000 U.S. veterans of the Korean War currently living in Florida. There ‎are 157 Floridians still unaccounted for as a result of fighting on the Korean peninsula (1950-‎‎1953).‎

The Consulate, based in Atlanta, Georgia, promotes Korean companies’ business environments in the ‎southeast United States and supports the activities of future generations of Korean-Americans. It also strives to ‎strengthen its relationships with organizations that support Veterans and Veteran service organizations.‎ 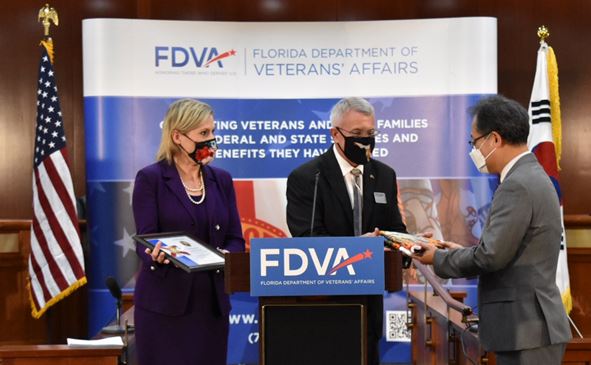