The State of Florida has three official memorials dedicated to veterans located in the capital city, Tallahassee.  The sites are maintained by the Florida Department of Management Services. 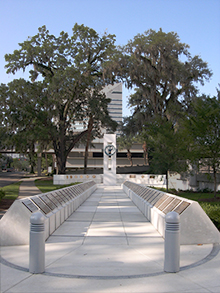 Location: In front of the R. A. Gray Building, 500 South Bronough Street, Tallahassee.

Florida contributed $248,000 to the National World War II Memorial in Washington, D.C. — one dollar for each service member who entered the military from Florida during the war.

Note: Due to construction activities, the Museum of Florida History’s World War II Exhibit, located on the bottom floor of the R. A. Gray Building in Tallahassee, is temporarily closed effective Aug. 15, 2022. We will update you when the exhibit is open and accessible. 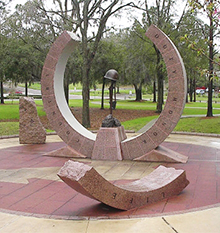 Florida’s Korean War Memorial was dedicated on Dec. 11, 1999, by Gov. Jeb Bush. More than 294,000 Florida veterans served in the Armed Forces during the war. The Sunshine State is currently home to more than 105,000 Korean War veterans. 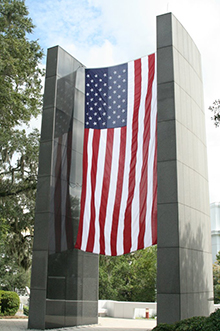 Florida’s Vietnam War Memorial was dedicated on Nov. 12, 1985, by Gov. Bob Graham. The memorial, with its twenty-eight by fifteen foot U.S. flag, contains the names of all known Floridians killed in the war. The Sunshine State is currently home to more than 498,000 Vietnam veterans.